It’s been about a week since our last update but we’ve been hard at work. We took this week to focus on improving the basic battle system of Star-Shift. Since Star Shift was originally developed in RPG Maker VX Ace, we had already gotten this battle system working, but when we ported over to MV the plugins were not in a usable state at first. Those issues have now been resolved. Here is a short video that shows the combat system in action. This can be greatly improved upon, but the basic skeleton is now working.

To make our battle System work in RPG Maker MV, we used a combination of plugins to pull it off. We will share with you how we got it working in case you wanted to do something similar in your game.  We also had to modify a plugin which we will provide the link to.

First, let’s go through a few things and explain why we think this was the best fit of a battle system for this game and why we felt that the default battle system in the engine is not the way to go.

Normally RPG Maker MV has separate graphic sheets for characters that walk on a map, and characters  that fight in battles. This means a designer would normally need to make a full sheet for the character walking around, and another full sheet for each character when they battle. It also restricts the battle to only be right/left side to side combat. A default sheet of this kind is called SV Battlers, and this is an example: 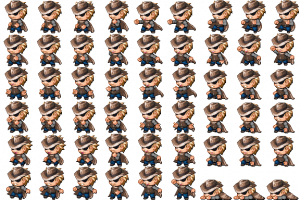 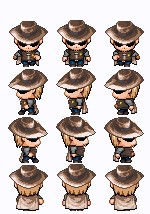 Obviously making one of these sheets with various poses for each character takes a lot of time. With Star-Shift having over 100+ playable characters, this wasn’t a viable option. Also the default combat system felt boring to us in various ways (as well as side-battle systems being too common or overused).

So we set out to make development easier on ourselves as well as more interesting game-play. We really wanted to use the default walking character sheets as battlers in the game, rather than having to make battle sheets for every character. Luckily we were able to pull this off.

Ok, but you might be asking yourself how are weapons handled in the battles? Like how are we animating a sword being slashed? Or a  gun being fired? The VE-Battle Motions plugin is very elegant in that it uses the icons in the normal icon sheet to show and animate the weapons in battle. Example of our G2 Railgun Pistol. 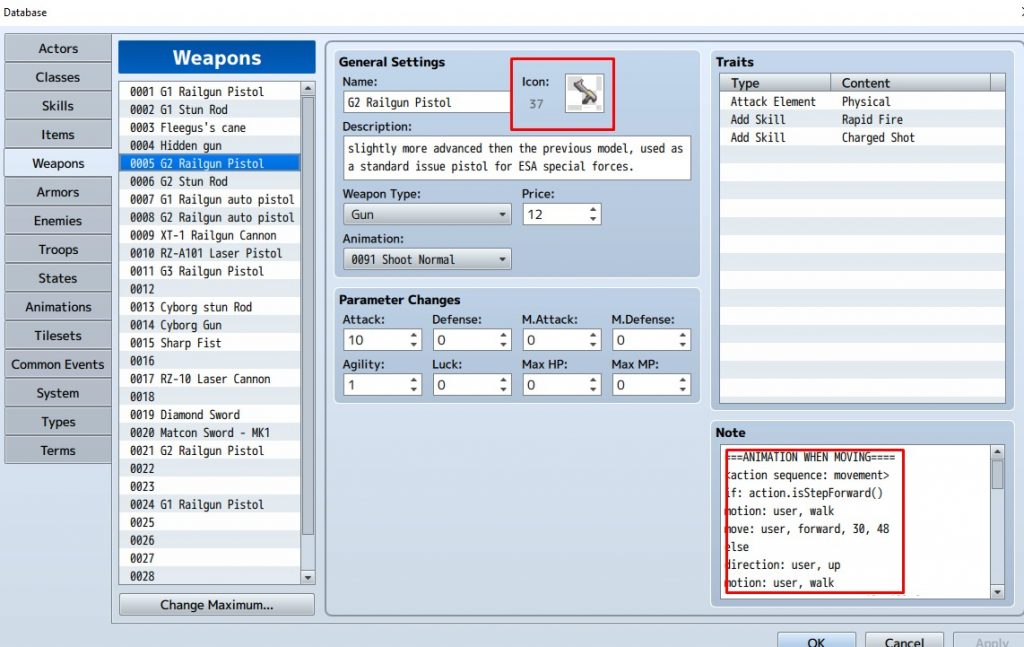 The red box at the top is the icon you set when you are creating items in the engine, this is the same graphic that gets used in battle. Meaning that every weapon that gets equipped on a character has a unique animation that can be set and will show up in the battle when user equips it. The way that it’s animated is in the Note Box  in the lower right corner in the screenshot. It’s kind of complicated to set up the first time, but once you have a type of weapon animated that looks good (sword, gun, etc.) you can simply copy and paste most of the time and you’ll get a similar animation for any other item. It also provides the added benefit of having each equipped item look unique in battle. The same plugin can be used to to animate just about everything with the enemies, the characters, or items/skills/weapons.

But we also had to modify Victor’s plugin as well. In the default version of the Battle Motions Plugin, we were not able to animate enemies or characters to turn up or turn down because the plugin was built for a side battle system mostly. But we were able to get it working by adding 6 lines of code. We didn’t think it would work and we were just trying random stuff, but to our surprise, it worked great! 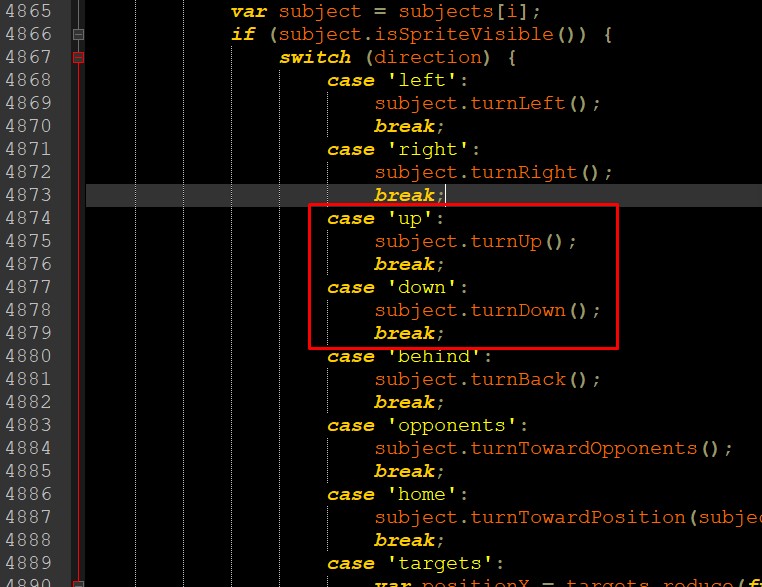 Also if you like Victor’s plugins, please donate on Patreon 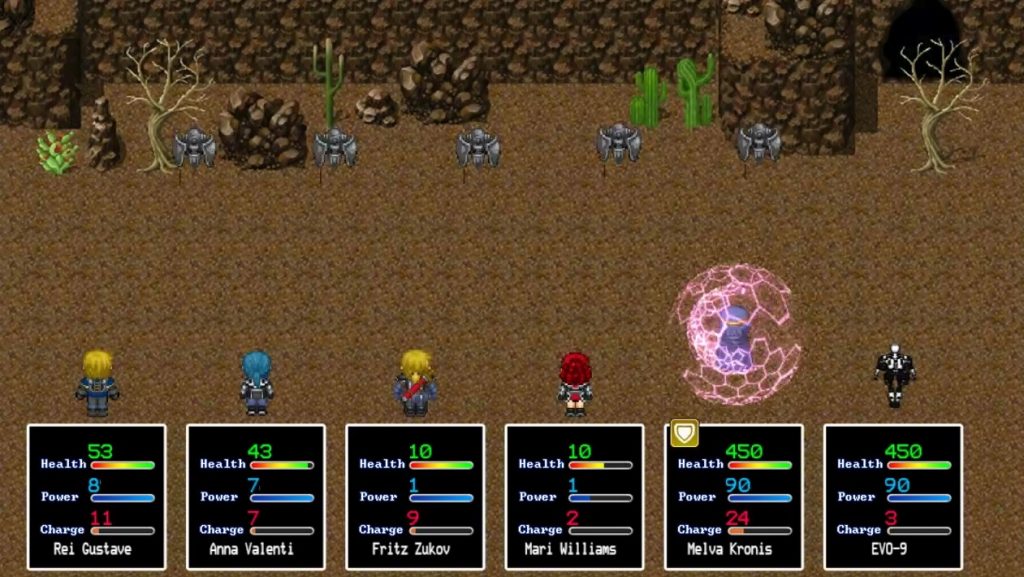 For custom placement of the characters on the battle screen – Modified SVActorPosition.js

This plugin actually comes with RPG Maker MV, but it’s in the DLC folder (when downloaded into STEAM), it is a very basic plugin that allows the user to custom place each character on the battle screen to the desired positioning. For us that desired positioning was to have 6 characters, and to have the character standing above their own Status box rather than in a row on the right side of the screen which is the default behavior. 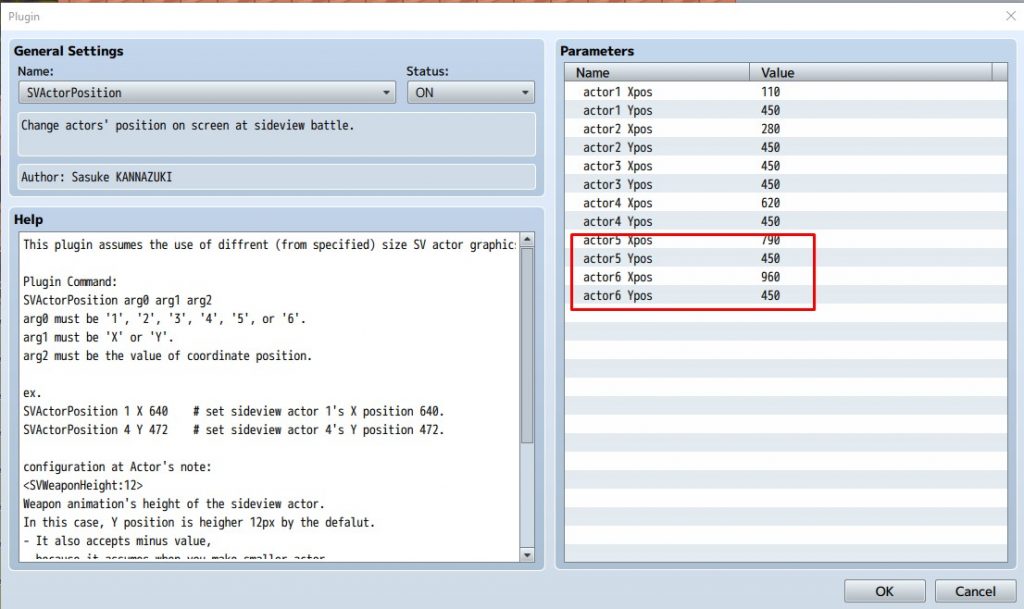 We did have to modify this plugin though because by default, RPG Maker only allows for 4 characters (as well as this plugin) in a battle, but in Star Shift we have 6 battlers. So we had to go into the code, and add 2 more to it. This was not difficult since the first 4 were already done, and it was simply a process of replicating what was already in the JavaScript file. After modifying, we had our 6 battlers option. If your game has 6 battlers or you have more than 4, less than 7, then here’s a link to the modified version we tweaked.

It’s only looking up from here:

This was a major part of the game that was giving us a hard time. We were worried that the battle system would not be ready for prime time when we release the game in 2019. But through some dumb luck and some minor mods to existing plugins, we were able to get it working. Please provide any feedback for this game or battle system. We want this to be a game that everybody can enjoy. Thanks again for your support!

Liked it? Take a second to support Douglas Gustafson on Patreon!

About the Author: Douglas Gustafson